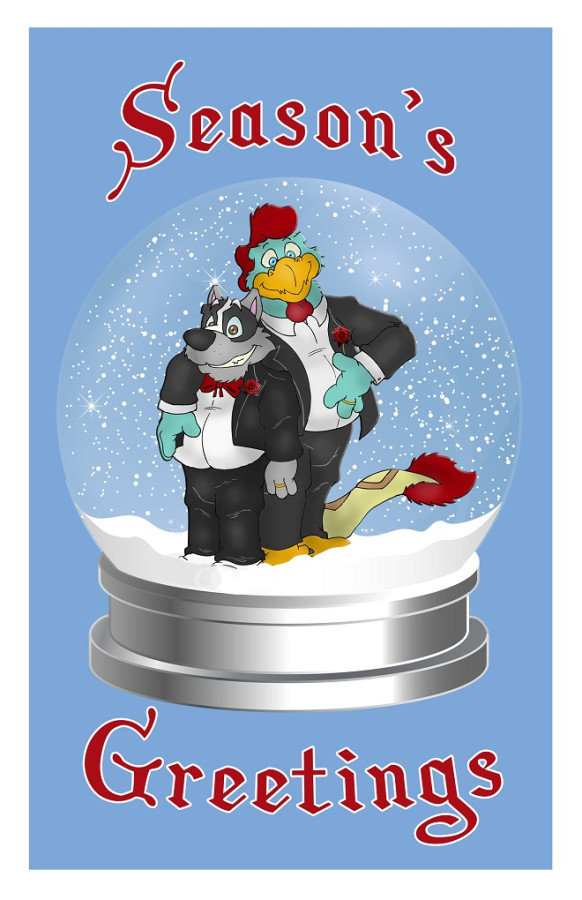 If that were real snow I'd be coiled around that badger squeezing him half to death trying to stay warm.

At about 7 this morning I was snuggling with a certain someone who I'll be marrying in a week, and the house phone rang.  We still have one of those, for some reason.

It went to the message, which tells people that if they know my cell phone number, they should use that.

Then my cell phone rang.  "Better get up," I said.

It was the woman who partners with me to go to jail, playing piano and running services for inmates there (one high security "tower", one low security "dorm") on Saturdays.  I could instantly tell she was going to say she was sick...she sounded awful.  "So I hope it's not troubling you to call and cancel just before going," she croaked.

It was a weird mix of emotions then.  I jumped right back into bed, which was nice.  But was I disappointed that we weren't going in for the services?

Yeah, maybe a little.  I like to stay consistent for them.

On the other hand, last week a woman in the services started pumping the pianist for information about me.  "What does he do?  How old is he?  Is he married?"  I found out this after she walked past me at the end of the service to go back to the dorm, and she said "I love you".

Giving her a chance to cool her jets might not be a bad thing.

I went to church last week mostly because I had to drop off things I had picked up as part of my ministry at the home of someone who lives right around the corner of the church, and it was a "Well, I already drove all this way" type of decision.

But I ended up not staying.  I was about half an hour early for the service, and I got some coffee and sat outside, purposefully not using my phone, or looking at much else besides people coming and going.  I had on a name tag that the church gives to new members.

People are good at looking but not making eye contact.  Scanning over the crowd as if they're looking for someone to talk to but they're really not, they don't really look to make eye-to-eye contact with anyone.  I notice this; I think about it with my furry character quite a bit!  Heh.

If something happened to me, would my name show up in their bulletins the next week on the list of people to pray for?  How, none of them would notice.  If something really bad happened to me, would they know to comfort my partner?  Definitely not, I'd be surprised if any of them would do anything even if there was some mechanism to know he existed, which there isn't.

I suppose that could be my fault for not being super out and vocal at the church but...it isn't me.  "The gay lifestyle" to them is dressing up in high heels and wearing make-up, if you're a guy.  I'm blowing a chance to show them that's far from what my experience is.  I'm not sure they'd care.  Being honest, how much care and compassion do I summon up in myself for them?

If I wasn't still involved with their prison and jail ministry I think I would have stopped going a long time ago.

I wanted to take a few minutes and share something with you all. Some of you know the thing with my dad, but in the last few years while Mom was still alive and they were in their house, they didn't want members of the extended family and their partners and spouses in their house because of not accepting their orientation.

Well, now that Mom's gone, Dad has had some time to reflect, and he has pretty much on his own, realized he was wrong, humbly apologized to my mother and father in law, and now, he's been invited to Thanksgiving dinner with everyone together.

I can't tell you how much he's looking forward to it and visiting with everyone, and formally apologizing to everyone and for the years that were needlessly lost. For Renee and I it's been 7 or 8 years since they've attended -- for holidays we've had to visit first my parents then her parents, or vice versa, and give them all similar attention so that no one felt slighted. This year will be wonderful.

What are your plans this Thanksgiving and beyond?

Went to the county jail for the two inmate services I volunteer for, and found out that
1) There'd only be one service since one of the dorms is closed down for maintenance or repairs or something
2) No one on one visits could take place

That made it a short day.  And I only got to use my "Do you think you could find saints in jail?" question once.

Partially just trying to stop our slide into nothingness (currently at 1874th) and partially seeing if there are any furs who still drop by now and then.

I had a short work week. I took off Monday due to the useless "Columbus" day, and am taking off tomorrow (Friday) because of a couple doctor's/dentist appointments for Renee and me. I only had one round trip to work and back, because I stayed two nights in a row on my fur friend's couch. I left home Tuesday morning and didn't see Renee again until a short time ago on this Thursday evening.

I see a few more of you on Twitter lately, and when I do, I follow back immediately. If I haven't seen you just nudge me and let me know you're there.

Hope you're doing okay. Any plans for Hallowe'en?

I sure hope you're all surviving the summer. If you're like me, you're more than a little tired of the scorching temps along with the humidity. I saw Kiran's twitter feed the other day that he was ready for winter in so many words.

I'm surviving though my work situation has deteriorated considerably over the last 2 months. I can go into detail if anyone wants, but it's probably more than I need to go into here.

Some of you who are still hanging around on LJ, please let us know what's going on in your life. I think about you more than you could probably believe. It's good seeing many of you on Twitter, but of course it's not like we had here in this community.

Greetings. We've been closed to new members for awhile to keep out spam. About 4 week ago, I was contacted by a former member who wants to return. They contacted me by LJ Message. They provided me an email contact because of my inability to reply to their LJ Message due to their own protection settings. So I set an invitation for them and let them know by email that they should be able to friend and member rainbow_ark. It's been weeks, but they have yet to join and I have no way of knowing if they received my email confirming their request.

Because of this, I have once again opened rainbow_ark to new members for a limited time, to allow this one person to join if they ran into a snag with the invitation I set for them.

I am not a private person. I don't have restrictions on my LJ Message, and my email is readily available to anyone.

I hope everyone is doing good. After the passing of my mother on May 1, Renee and I have spent the last two days getting my dad moved into a retirement community apartment. There as been so much coordinating with movers, realtor, Direct TV, and a delivery of a new smaller bed direct from the store, and Renee and I have been making countless trips to and from the old house with Dad's smaller items, and getting him set up. We are both dead tired, but it's down to details, and we returned home at 11 last night.

I was thinking on the way to work this morning that it might be fun to plan a silvermuzzle furmeet or even full-blown convention somewhere. I don't think I've already expressed this in an earlier post, but who knows, I'm the kind of guy who can hide his own Easter eggs.

Differentiating grey from silver, I think anything 29 and up is considered grey now. But silver as referenced by others is more like 55 or older. So currently, it would be mostly Boomers, but not to exclude anyone from the convention--welcome everyone.

Everything would have major wheelchair access, and make sure there is plenty of con space for conversation. Video game tournaments could be Doom, Blockout, and Tetris. Fursuit dance DJ could play stuff like Herbie Hancock, Dis is da Drum, and Deodato, Super Strut. Lot's of medical/first aid personnel on hand throughout. Panels could run the gamut--everything you could imagine and beyond.

What other things should be considered?
Collapse